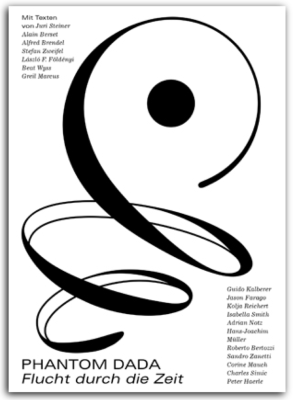 The 100th Dada anniversary in Zurich, 2016 – in retrospect and with an outlook, in photos and with text, with objections and in appreciation.

The Zurich Dada anniversary in 2016 took place on a variety of different stages with a network of numerous partners and institutions, triggering a global echo throughout the media. Dozens of international editors reported, some of which several times and in great detail, about the events of the interdisciplinary program revolving around the birthplace of Dada, Cabaret Voltaire. During the centennial, the Dada heritage became recognizable as something enigmatic which can be explored and analyzed further and further. Dada is, however, a spirit, not a style, and as such remains elusive.

Phantom Dada now summarizes the centennial with essays by key Dada experts, several international press commentaries, an original glossary of Dada buzzwords as well as a presentation of texts and photographs from the anniversary exhibitions in Zurich and beyond. In a mosaic of many facets, a composite sketch of the avant-garde movement emerges in its flight through time.

PHANTOM DADA from dada100zuerich2016 on Vimeo.